Session 3 of Mayor’s Neighborhood University took us through key City Departments and how they use social media to share stories and provide customer service to citizens of Tampa via Social Media.

City staff, led by Ashley Bauman, Marketing and Communication Director for the City of Tampa, shared a number of success stories via platforms like facebook and youtube among others. We’re going to take this blog post to highlight some of the City’s most creative and popular posts.

The #selfiekid moment during SuperBowl LII also gave Tampa the opportunity to troll Minnesota ever so gently by pointing out that, no one should do anything, anywhere, but Florida in January. 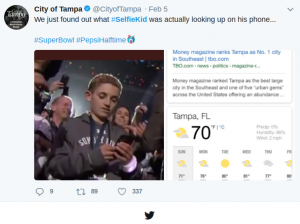 The Tampa Police Department has also been very effective with messaging on youtube. Generating over 40,000 views of this video highlighting officer use of body cams.

TPD also used YouTube to share this video of the Seminole Heights Serial Killer which was viewed over 750,000 times.

On the lighter side of things, new Tampa Police Chief Eric Ward even did his best Macaulay Culkin to promote Tampa’s Vacation Watch Program. 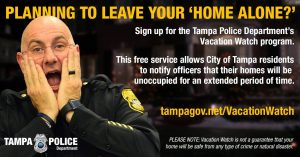 Tampa Parks and Recreation drives a lot of engagement and signups for events using facebook to promote everything from kids’ camps to senior events.

Building these platforms year round creates a great opportunity for the City to have direct access to viewers during natural disasters. During Hurrican Irma, social and traditional earned media informed the public of evacuations and city staff also used the internet to share information on recovery efforts.

At the end of the day, one of the best vehicles for getting answers to problems and issues that you might be having with the City of Tampa is direct messaging via social media.

WWE wrestler & actor Dave Bautista even discovered that after posting a complaint regarding getting a permit for a new gate for his Tampa home.

@CityofTampa what the hell do I have to do to get you to approve a GD gate? Its been 7 months of waiting on permits,spending thousands and thousands of dollars on surveys,dealing with inspectors with sh%%tty attitudes, jumping through hoops,etc. Wtf do I have to do?! Its a gate!

After a little investigation and discussion offline… it turns out he contractor was responsible for the delay… but he got his answer.

Check out the City of Tampa online at: